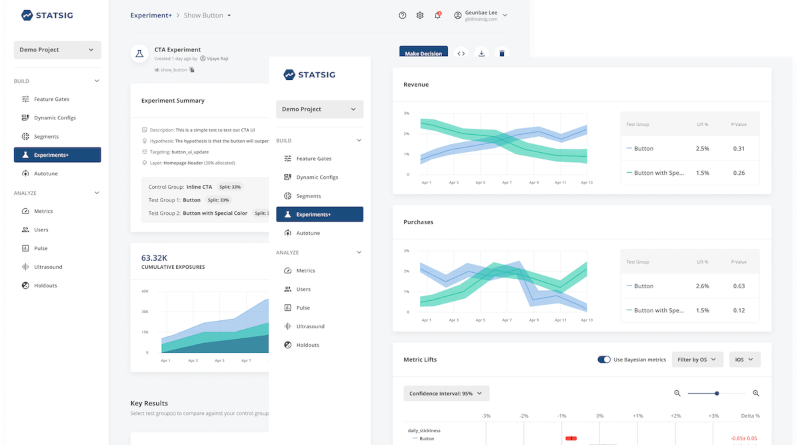 Statsig Inc., a new startup with a cloud service designed to help companies find ways to improve their software, Thursday noted that it closed a $10.4 million funding round led by Sequoia Capital.

Statsig was started about six months ago by a group of former Facebook Inc engineers. The startup has developed a service that allows companies to create different versions of an application component, for example the interface, and identify the most popular version with their users.

An online retailer can use Statsig’s service to find ways to improve their e-commerce website. The company’s developers could create a new shopping feature to increase recurring purchases, then perform an evaluation using Statsig’s service to determine if it will achieve the desired result.

Statsig evaluates the impact of new features by running so-called A/B tests. In an A/B test, a company makes a product enhancement available to a small subset of its customers while other users continue to access the original version of the product. The company then compares the user experience of the two groups to determine if the improvement produced improvements.

There are already a number of tools on the market that allow developers to evaluate new features through A/B testing. According to Statsig, what sets its service apart is that it allows software teams to run up to ten times more tests than with other tools. The service helps increase productivity by streamlining some of the most time-consuming aspects of the process.

“Data is the incredible bridge that brings teams together to quickly respond to customers and answer key business questions,” said Madrona Venture Group Managing Director S. Somasegar. “Unfortunately, organizations still spend a lot of time analyzing data to make sense of it. Despite endless cloud resources, mainstream analytics tools continue to inhibit the use of data for routine product decisions that teams take every day.”

One particular analytics task that Statsig promises to simplify is processing A/B test results. Statsig’s service automatically measures the influence of a new feature on a particular business metric, such as the percentage of users who click on an ad or the average purchase value, and the results are then visualized in the form of graphs . This eliminates the need for organizations to set up a dedicated analysis environment to process feature test data.

For companies that need particularly accurate information, Statsig can not only determine how an updated edition of a product compares to the original, but also test multiple versions of the updated edition. An online retailer considering rolling out a new “buy now” button on their website might experiment with multiple versions of the button. Statsig tests each version with a different set of users and analyzes the results to determine which button design increases sales the most.

Statsig says that although it was launched only a few months ago, early customers are already using its service to test features used by millions of consumers. The $10.4 billion in funding the startup announced this week will help it add more customers.

“Statsig is going to be a transformational product for most technology companies,” said Sequoia partner Mike Vernal. “It enables product teams to operate quickly and decisively in a decentralized way by understanding the impact of the changes they make.”

Are manual software testing getting obsolete?

When might you need security testing? - Software testing news